A Motorcycle Journey to Celebrate the 150th Transcontinental Railroad Anniversary

"...around every corner was something unexpected.”

Fifty-one-year-old Sven Davies just returned home from a 3,140-mile motorcycle trip following the Union Pacific Railroad line from Council Bluffs, IA to Promontory, UT. The nine-day trip was made in honor of the sesquicentennial of the first transcontinental railroad’s completion.

“I set out from Council Bluffs, IA and then Omaha, NE to ride through every town along the [transcontinental railroad’s] Union Pacific Line,” Davies said. “I basically road the Lincoln Highway all the way to Promontory Summit, UT. Sadly, time has seemed to wash over much of the railroad's history, but there were still plenty of historical markers and cool old downtowns to explore.”

A single dad of two teenage girls, Davies took to the road by motorcycle for a new experience.

“Not having the willing travel companions that I had when [my girls] were younger, I have had to come up with more adventurous ways to use up my vacation—hence the motorcycle trip.”

Davies’ ride was inspired by a television series and his childhood in Ogden, UT (Ogden later replaced Promontory Summit as the junction point of the two railroad companies, Union Pacific and Central Pacific, who built the transcontinental railroad). Davies also says a mid-life crisis may have had something to do with the trip.

“My inspiration was one part the TV series Hell on Wheels, one part a craving for adventure, and a dash of a mid-life crisis,” Davies said. “Who am I kidding, maybe more than a dash.” 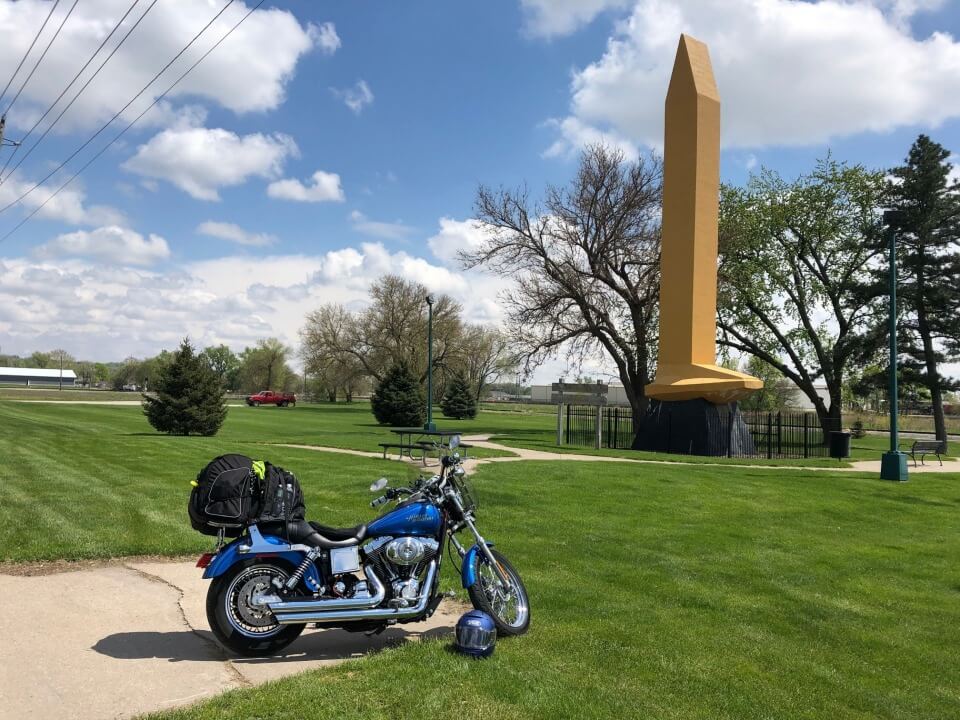 “While in Council Bluffs at the [Union Pacific Railroad] Museum, I was thrilled to learn about the Squirrel Cage Jail,” Davies shared. “It was a fascinating old jail like I had never seen. I enjoyed getting to explore each level, [imagining] the early train robbers and general troublemakers that may still haunt the cells.”

After leaving Council Bluffs, Davies road through Nebraska, part of Colorado, and Wyoming, all the way to Promontory, UT. Once there, he spent three days participating in sesquicentennial celebrations.

“It intrigued me to see how each city preserved its past,” Davies said. “Some cities had raised their old train depots years ago, while others have turned theirs into museums—Omaha and Cheyenne as examples.”

Riding through every town on the railroad’s path gave Davies some unique perspectives and personal stories into the past. During the start of his trip, while visiting Omaha’s Durham Museum, Davies met a museum volunteer whose grandfather had been an engineer for Union Pacific, working on steam engine #833.

“Near the end of the trip in Ogden, I [saw] that very steam engine on permanent display at the Cities Union Station,” Davies said.

Davies documented the trip with photos and stories on his Instagram account @UnionPotato, made specifically for the adventure.

“My girls nicknamed my motorcycle ‘Potato,’” Davies said of his trip’s Instagram handle. “And, of course, ‘Union’ for the Union Pacific Railroad that I followed to [Promontory].”

Though his trip has ended, it gave Davies ideas for future adventures. Next time he visits Council Bluffs, he hopes to explore more of our historic downtown and a railroad related site he missed.

“When I was first planning my trip, I had learned about the Union Pacific Museum, but I didn’t know about the other sights [in Council Bluffs] that existed,” Davies explained. “Next time I am in town, I will want to see the Grenville Dodge Home. That is maybe what stood out most—around every corner was something unexpected.”

This post was originally published on May 22, 2019 on the Unleash Council Bluffs blog.