Go for the Loess Hills, Stay for the City by the Bluffs

Go for the Loess Hills, Stay for the City by the Bluffs

Much of the world knows about iconic cities by the bay, by the sea, and by the mountains. But what about a city by the bluffs?

If this sounds intriguing it’s time to take a closer look at Iowa. The landscapes boast far more than the undulating row crops it’s known for. In fact, the heartland state hides one of the rarest landforms in the world. The Loess Hills.

And alongside these spectacular hilly dunes is a Midwest city you might not know either. The City by the Bluffs aka Council Bluffs, Iowa. It’s a sleepy city, quaint and cozy, perched on the water, and nestled in the hills. And it’s brimming with historical significance, charming urban parks, and surprising sustainability initiatives.

What are the Loess Hills?

The Loess Hills are a fragile, unique, and temporary landform known to exist in only two geographic locations around the globe: Iowa and China.

The Loess Hills get their name from their Loess soil composition, a unique sugar-like dirt (also known as glacial flour) that once drifted across The Great Plains following the last ice age. Eventually, the dunes solidified into today’s regal hills, thanks to the flourishing prairie that rooted and covered Iowa. 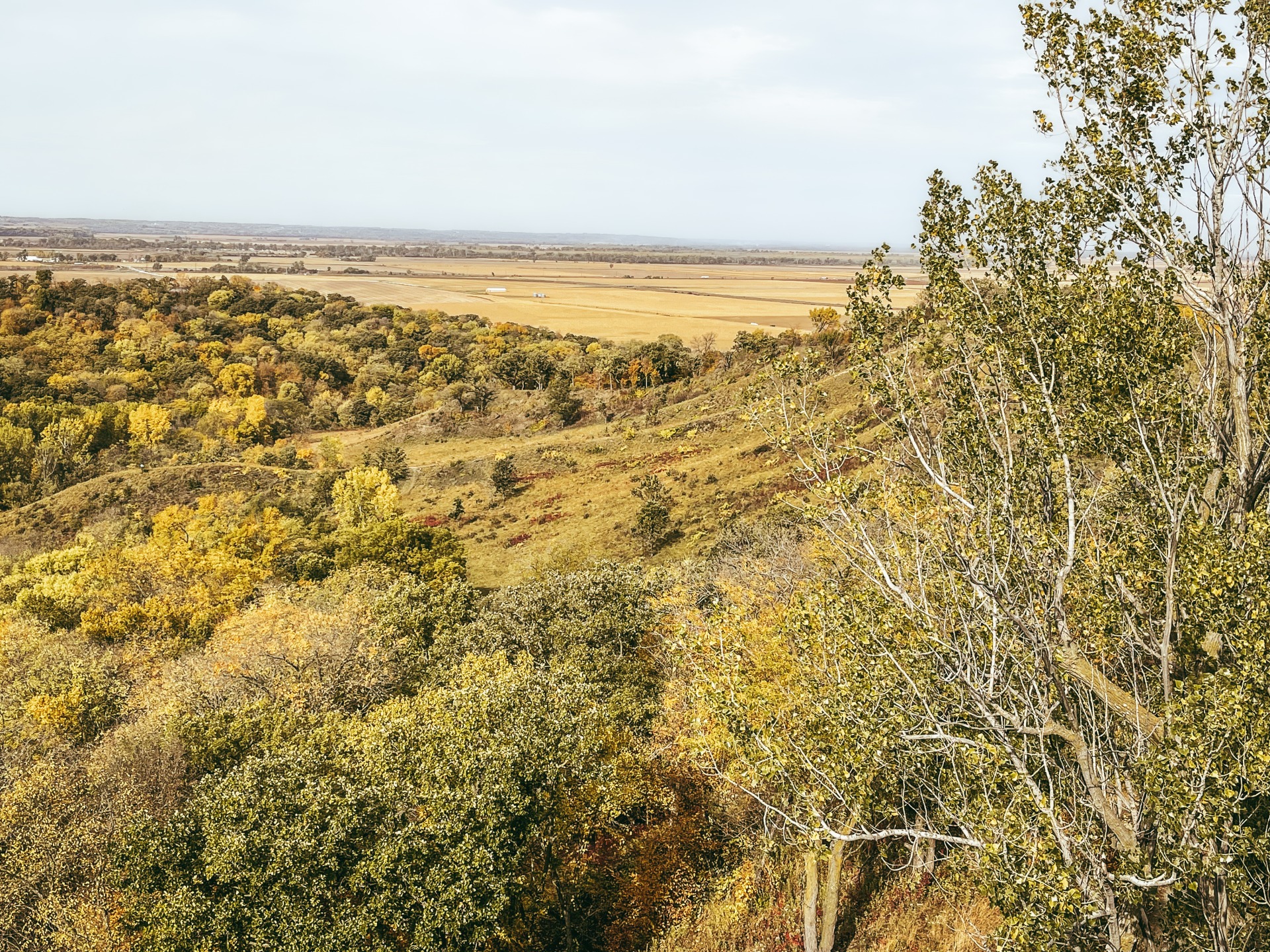 So while the rest of Iowa is composed mostly of sweeping plains covered in row crops, the Loess Hills presents a unique landscape; a 200-mile swathe of scenic ridges peaking 200 feet above the Missouri River flat plains.

The Best Places to See the Loess Hills in Council Bluffs

The Loess Hills blanket Iowa’s western border, most notably in Pottawattamie County, surrounding the city of Council Bluffs. Many of the popular hiking trails, campgrounds, and cabins are located within 20 miles of the quaint city. 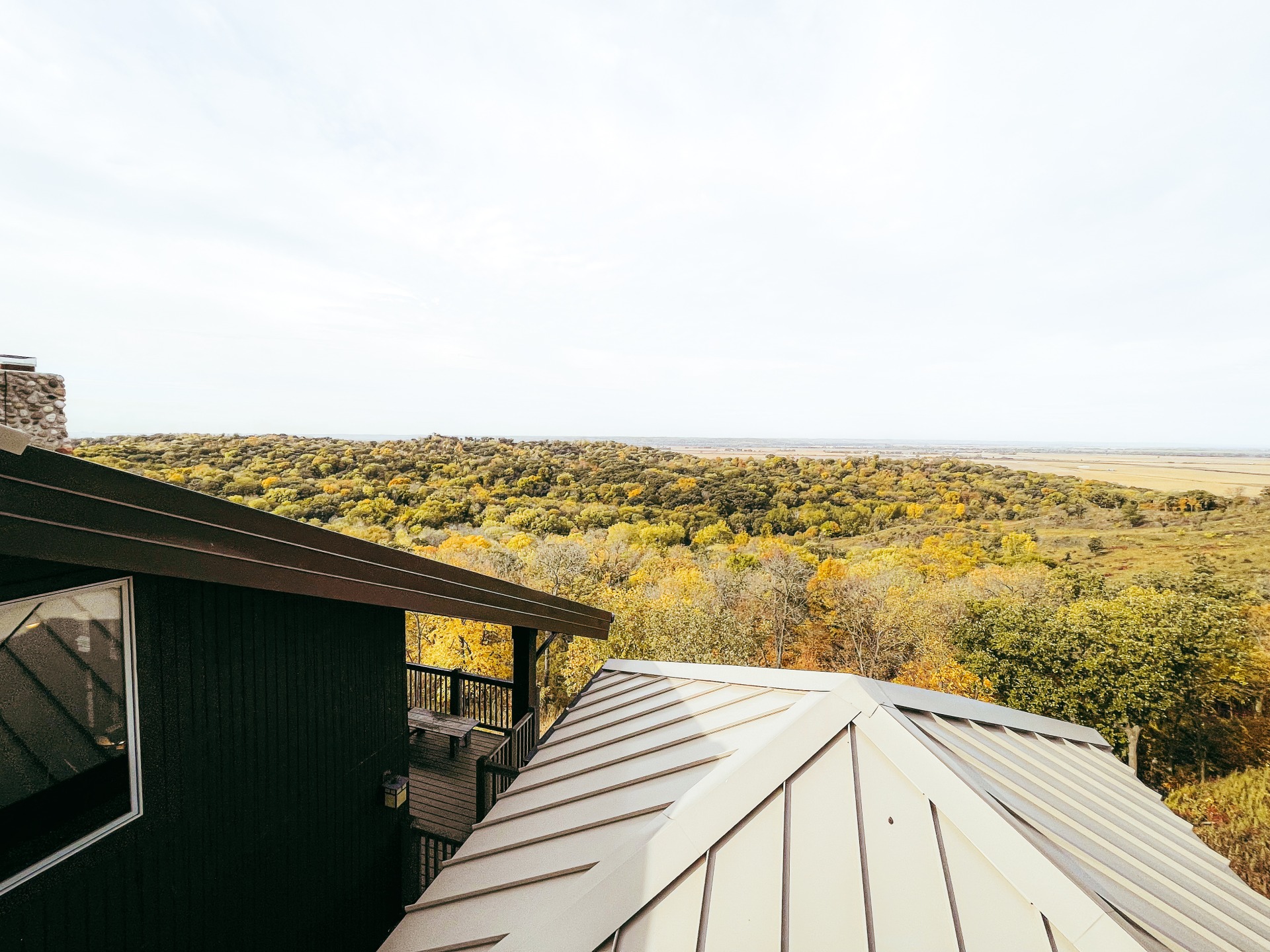 If you are visiting from September through December, don’t miss the Hawk Observation Tower to see hundreds of migratory raptors passing by on the “Hawk Highway.” Notable species regularly seen at the Hitchcock Nature Center include bald eagles, golden eagles, osprey, peregrine falcons, and vultures. 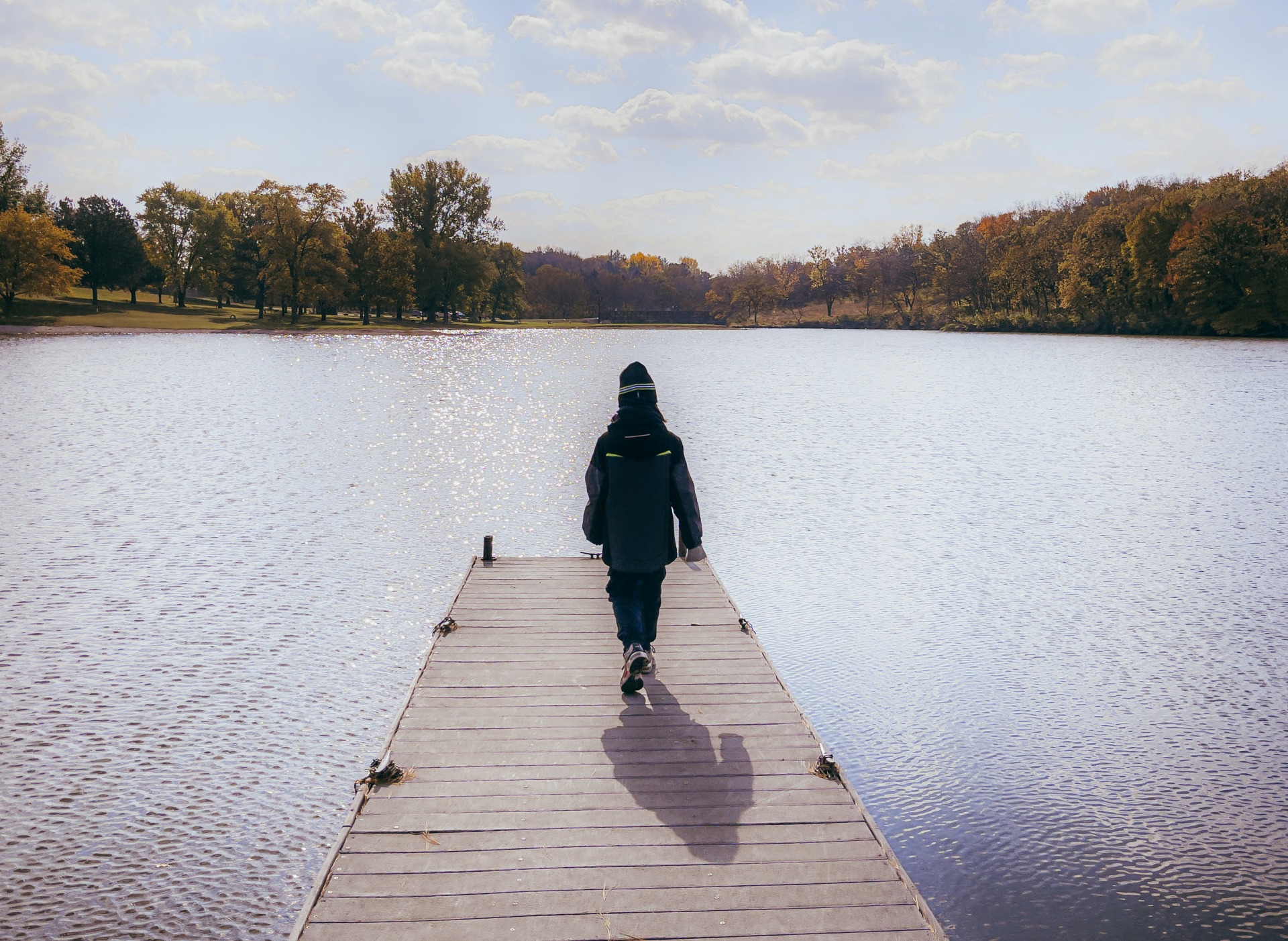 Many visitors enjoy the unique diversity of wildlife in the Loess Hills including migratory waterfowl and raptors, deer, coyotes, bison, elk, and the occasional black bear. There are even several endangered species in the region like the red-cockaded woodpecker, the upland sandpiper, the western spadefoot toad, the yucca moth, and the northern grasshopper mouse.

Sustainable Things to do in Council Bluffs

Council Bluffs is a small Midwest city that gets a little greener every year which means there are a lot of sustainable things to do! Many local initiatives are taking great strides to create bigger and better urban parks, revitalize historic districts, and uplift local business owners.

Visiting Council Bluffs without stopping to see Bob would be a serious blunder. Bob, as the locals call it, is actually a bridge. It’s formally known as the Bob Kerrey Pedestrian Bridge, and at nearly 3,000 feet in length, it’s one of the longest pedestrian bridges ever built. It’s also an inspiring social collaboration; the result of two cities and two states partnering to connect their remarkable green spaces across a major river - and a border! 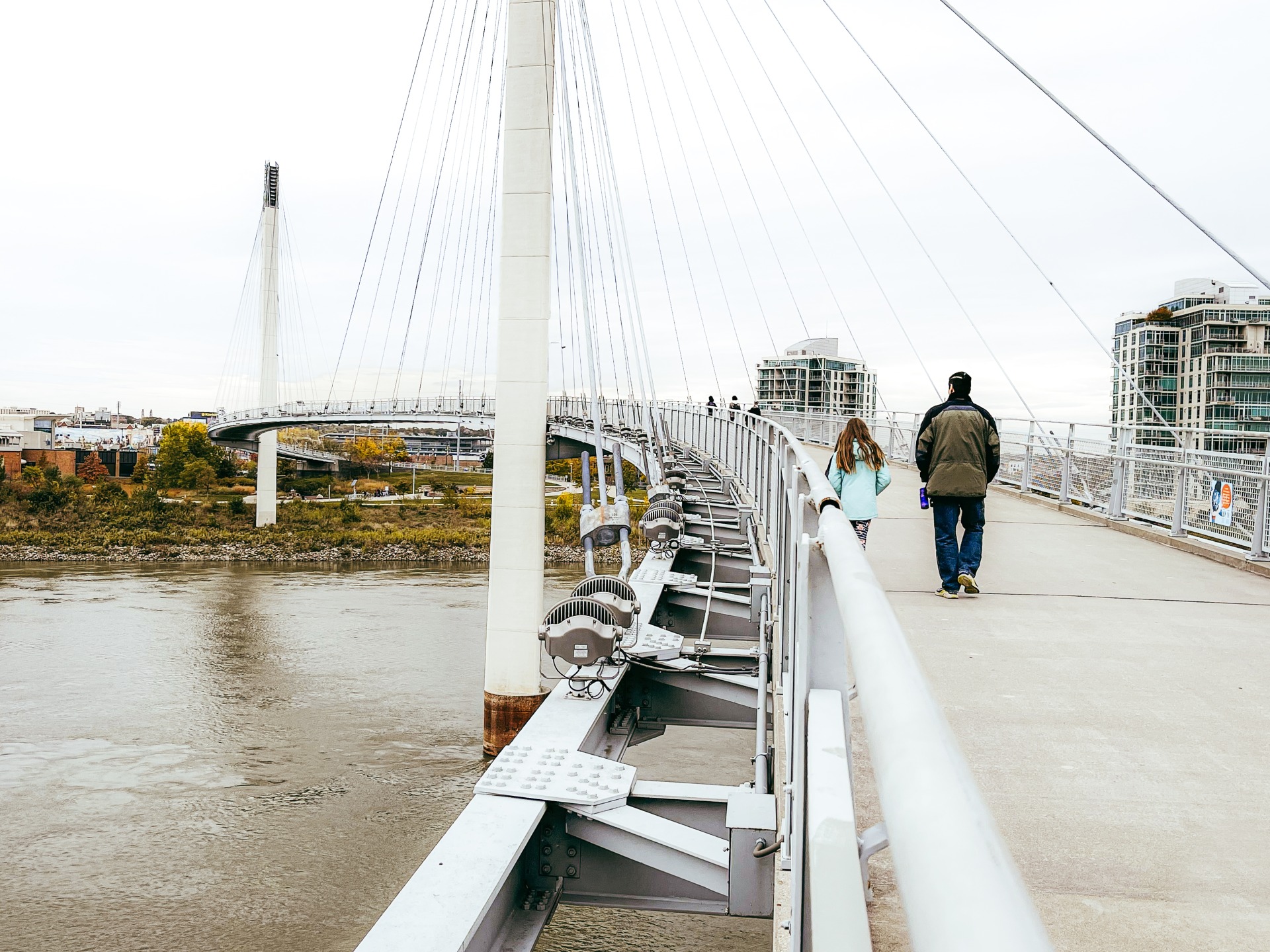 Step onto Bob the bridge via the Tom Hanafan River’s Edge Park in Council Bluffs. Then, waltz over the scenic Missouri River, across the Nebraska border, and onto the shores of Omaha. Here, you can meet Omar the blue troll and get your passport stamped at the Lewis & Clark National Historic Trail Headquarters. Then, loop back through the bridge to explore the 90-acre Tom Hanafan River’s Edge Park and hundreds of miles of connected paved trails.

The city of Council Bluffs first became a township in the mid 19th Century and was a pivotal part of numerous historic trails including the Oregon Trail, the Mormon Trail, and the Lewis & Clark Trail. And later, in 1863, Council Bluffs was designated by President Abraham Lincoln, as the official starting point of the Transcontinental Railroad.

Therefore, it makes perfect sense for The Union Pacific Railroad Museum to be located in the heart of the Council Bluffs historic district. It includes three floors of exquisite, interactive exhibits designed to invoke a love of history, presidents, and railroads in visitors of all ages. The museum is free, but it’s so impressively done it’s hard to exit without leaving a donation. 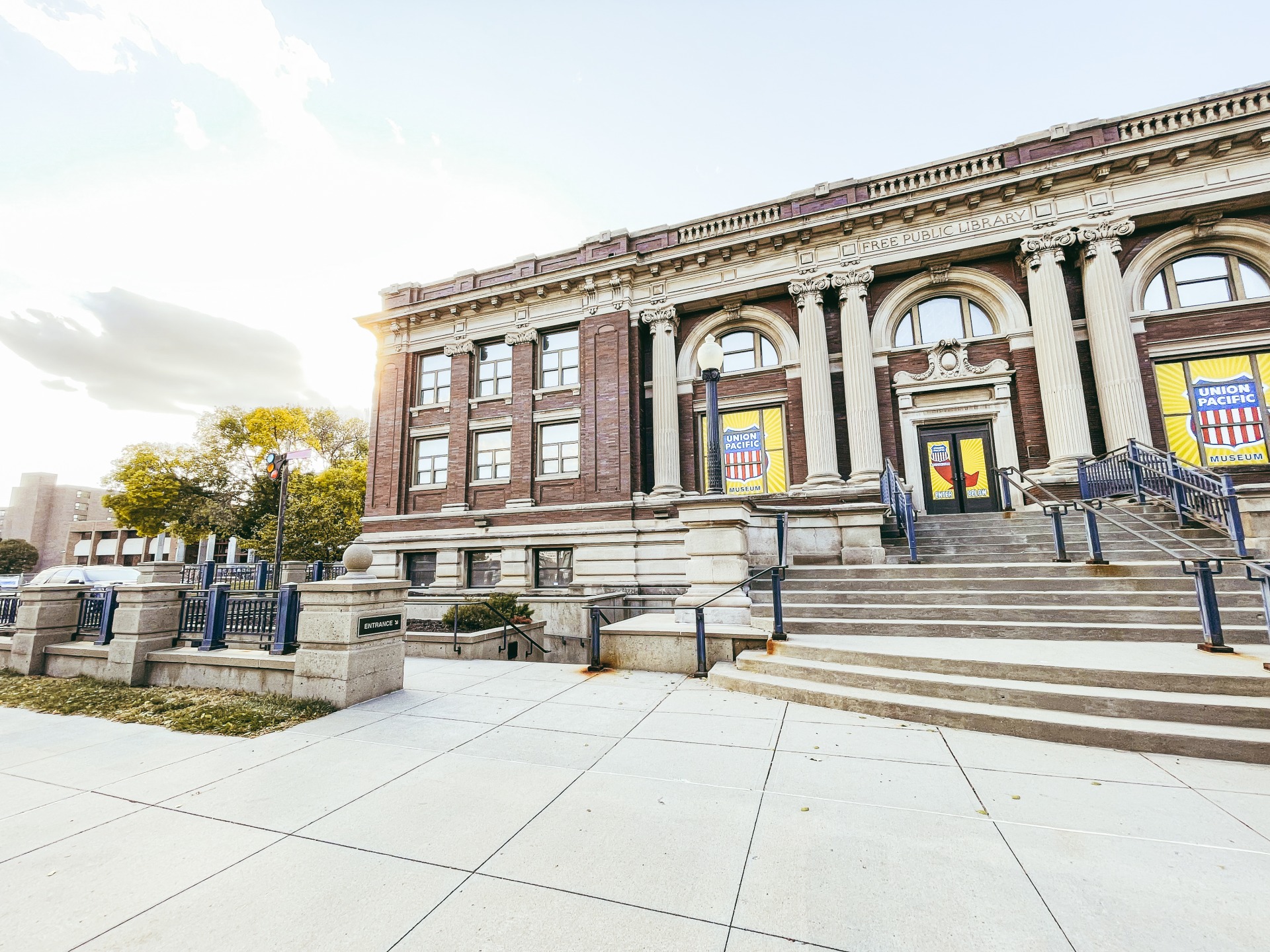 The three floors feature three permanent exhibits: America Travels by Trail (highlighting Amtrak travel from 1930-1971), The Lincoln Collection (featuring President Lincoln as the founding father of the Union Pacific Railroad), and Building America (an immersive retelling of what 1860s frontier America was like prior to the arrival of the railway and during its construction). Plus, there are three traveling exhibits that rotate throughout the year.

The Union Pacific Railroad Museum in Council Bluffs is located on Pearl Ave, ½  block south of Bayliss Park. It’s open Thursday, Friday, and Saturday, from 10 am to 6 pm.

One of the most sustainable things we can do as locals and travelers is to buy locally-grown seasonal fruits and food products. Orchards like Ditmars, located just 6 miles from downtown Council Bluffs provide the perfect opportunity to do just that. 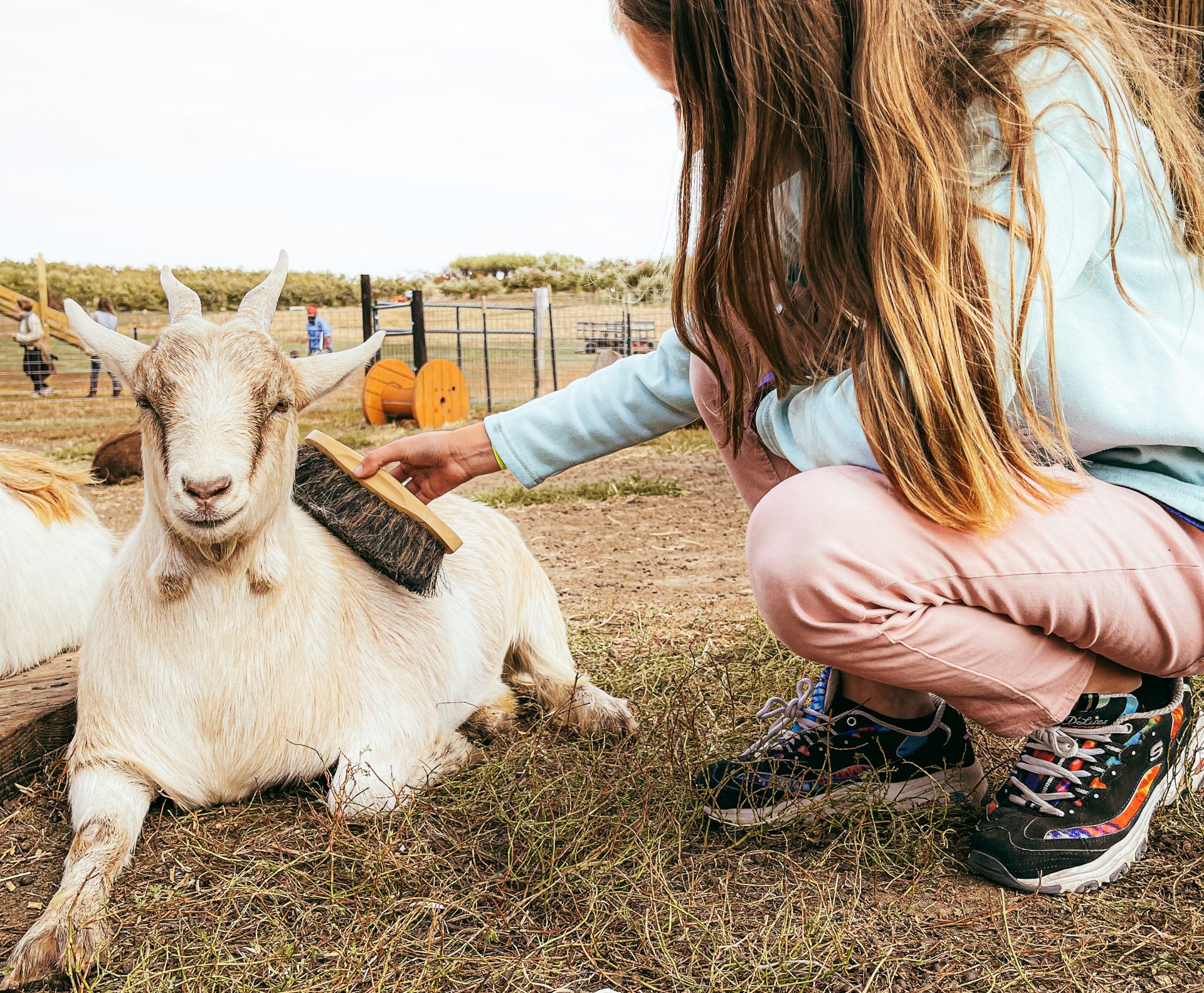 But don’t forget to come hungry, the indoor cafe serves up a classic like apple pie and cider, as well as iconic seasonal yummies like pumpkin donuts and funnel cake. Plus you can order a sip of their farm-fresh wine, pizza, or all sort of fair-style food.

Where to Eat at Sustainable Restaurants in Council Bluffs

Council Bluffs is a bit of a secret foodie destination in Iowa, boasting dozens of diverse, independently-owned eateries. Eating at them is a great way to promote sustainability in the city, uplift residents, and encourage sourcing local foods and products when possible.

If you need help learning where to eat in Council Bluffs, start with these two commendable restaurants:

Located on Main street, just a few minutes' walk from the Union Pacific Railroad Museum, Boxer Barbeque is the perfect stop for lunch after a tour. The menu is a complication of classic Midwest barbeque with in-house rubs and sauces served in monstrous portions. And the chef is dedicated to sourcing Choice and Prime grade Certified Angus Beef, best quality Butchers Block Pork, and local ingredients whenever possible. 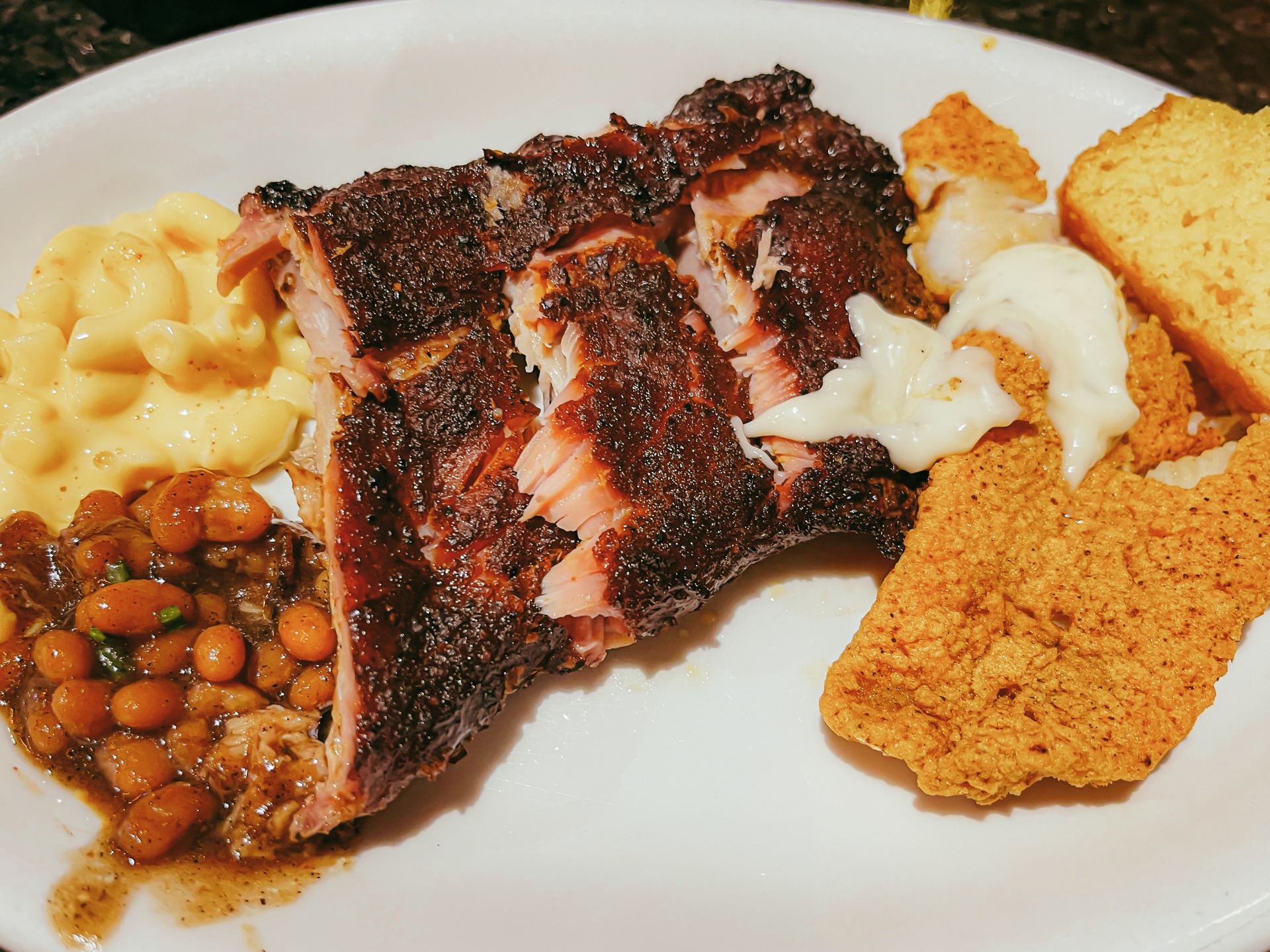 Boxer Barbeque has been serving the community for 15 years and recently moved to its current historic location. During the renovation, an intact mural from 1877 was uncovered. It has been preserved and is now the focal point of the banquet hall that feels a lot like an underground pub.

712 Eat + Drink is the epitome of urban sustainable food options, serving from its graffiti-inspired open-concept kitchen and breezy, outdoor patio. The menu subtly caters to all, with garden fresh flavors suitable for traditional diets, vegan, and vegetarian palates. Not to mention, they have a better-than-average kids' menu, and a very long list of cocktails, too! They are uber passionate about local ingredients and recipes from scratch (don’t miss their house ranch dressing), and it shows! 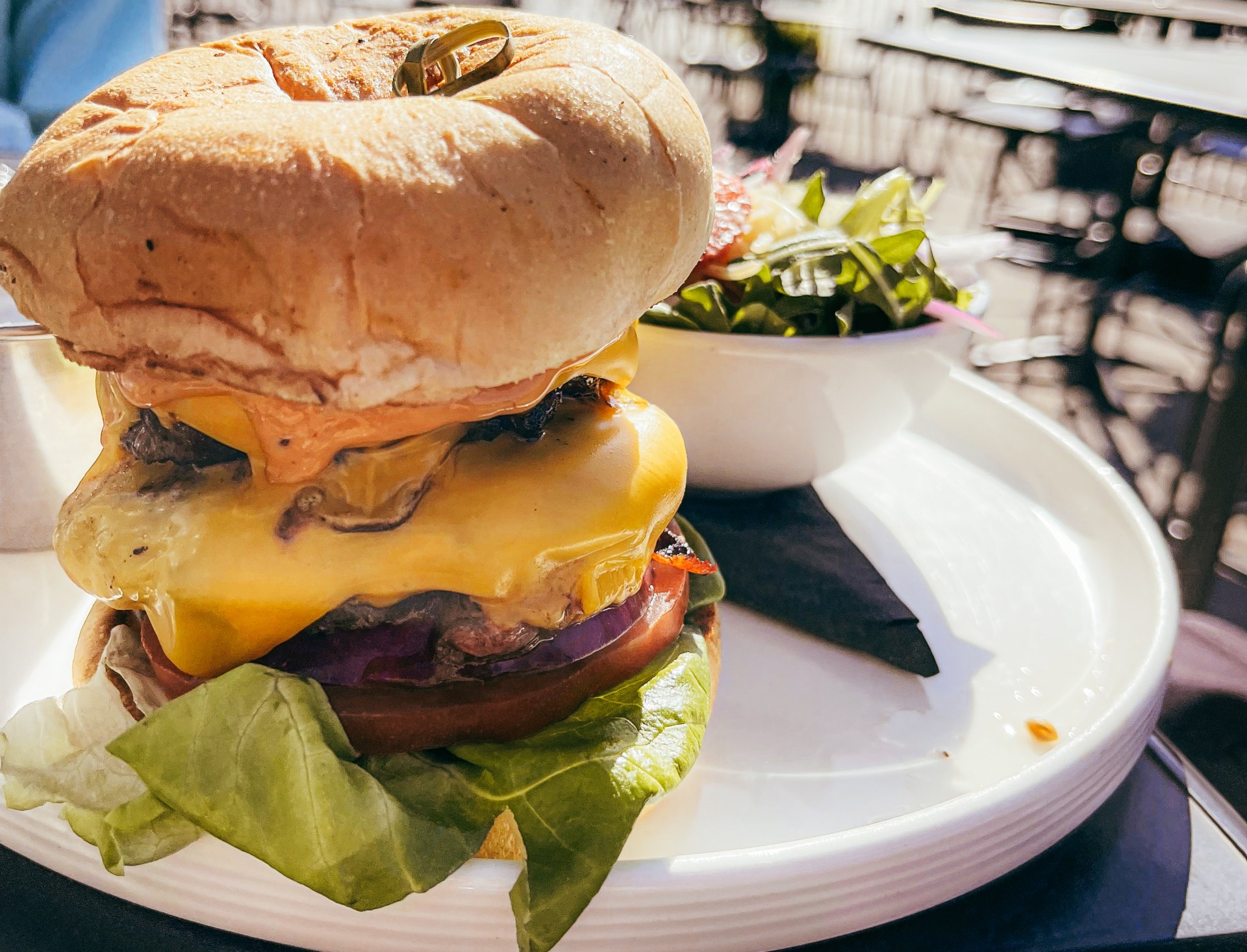 In October, the Council Bluffs Convention & Visitors Bureau invited Family Travel Nomads to visit Council Bluffs and Pottawattamie County to explore the Loess Hills during the fall season. This blog was written and provided by them after their visit. They run an awesome Instagram page where their goal is to teach families how to plan sustainable travel in both rural and urban areas! Check them out by clicking here.

This post was originally published on November 1, 2022 on the Unleash Council Bluffs blog.