A lot has happened in the last two years in CB!

Coming into town for the first time in a while? Council Bluffs has seen quite a few new restaurants and attractions pop up in the last two years. From scrumptious new restaurants with modern and trendy styles to new indoor and outdoor attractions, here are CB’s newest spots: 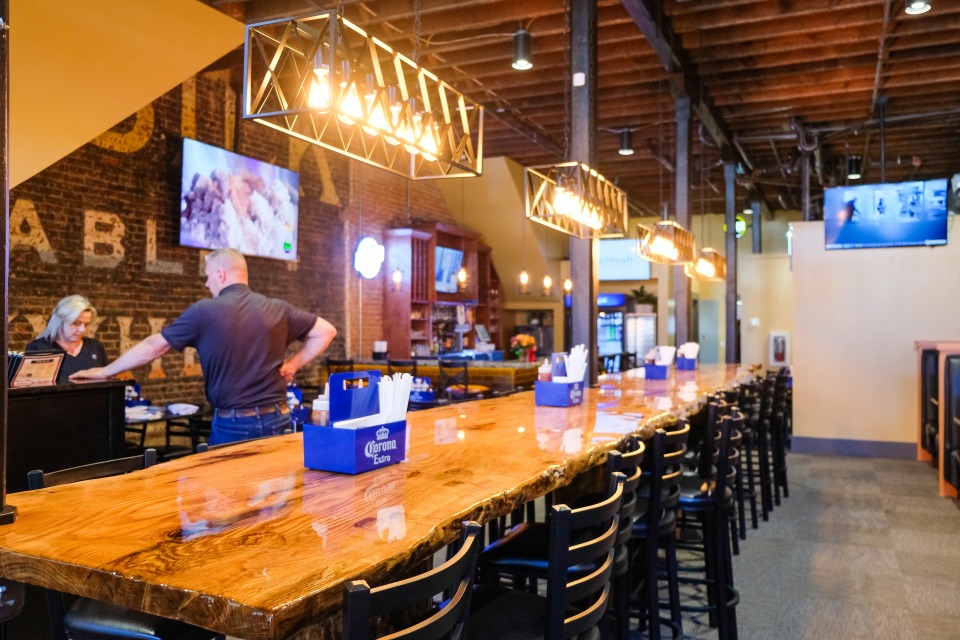 Though not new to CB, Boxer Barbeque relocated to the Haymarket Square District in early October. All of your favorites are still on the menu and you’ll want to check out their new industrial-styled digs. 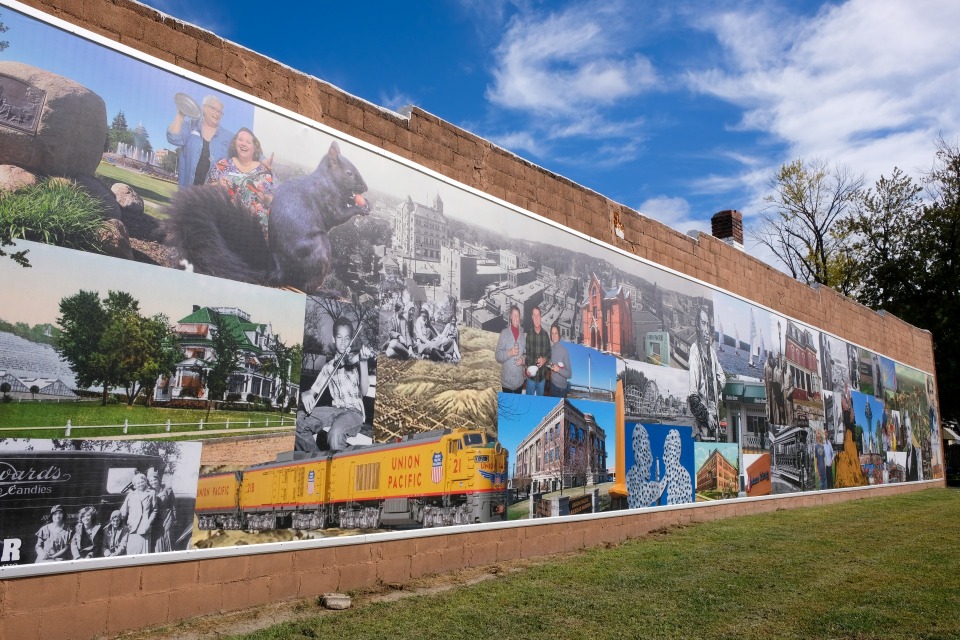 Located on South 4th and Worth Street, this photographic mural was installed in September. The mural is a collage of current and historic photos of the people and places of Council Bluffs. Take a selfie with it while in town!

Located at the Iowa West Field House, Iowa West Pickleball is a six-court facility that opened in September. The facility has reserved courts and open drop-in play sessions. Stop in for a game! 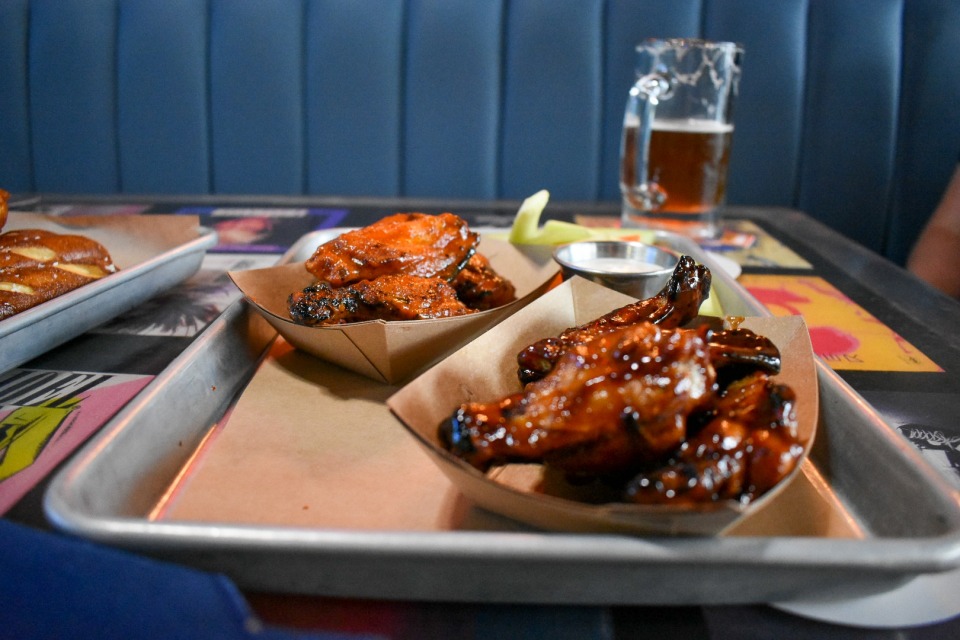 Lincoln’s Pub opened in September 2018 and about a year later, the owners expanded and opened Jefferson’s Lounge next door. While Lincoln’s Pub acts as a full restaurant (known for their burgers and dry-aged steaks), Jefferson’s Lounge complements its neighbor as a sports bar and cocktail lounge with games, bar favorites, and soon-to-come oven-baked pizza.

Sports Betting at the Sportsbook & The Book

Sports betting became legal in the state of Iowa on August 15 of this year. As a response, Ameristar Casino opened the sports betting venue the Sportsbook in Amerisports Bar & Grill while Harrah’s Casino and Hotel and Horseshoe Casino each opened The Book in their properties. 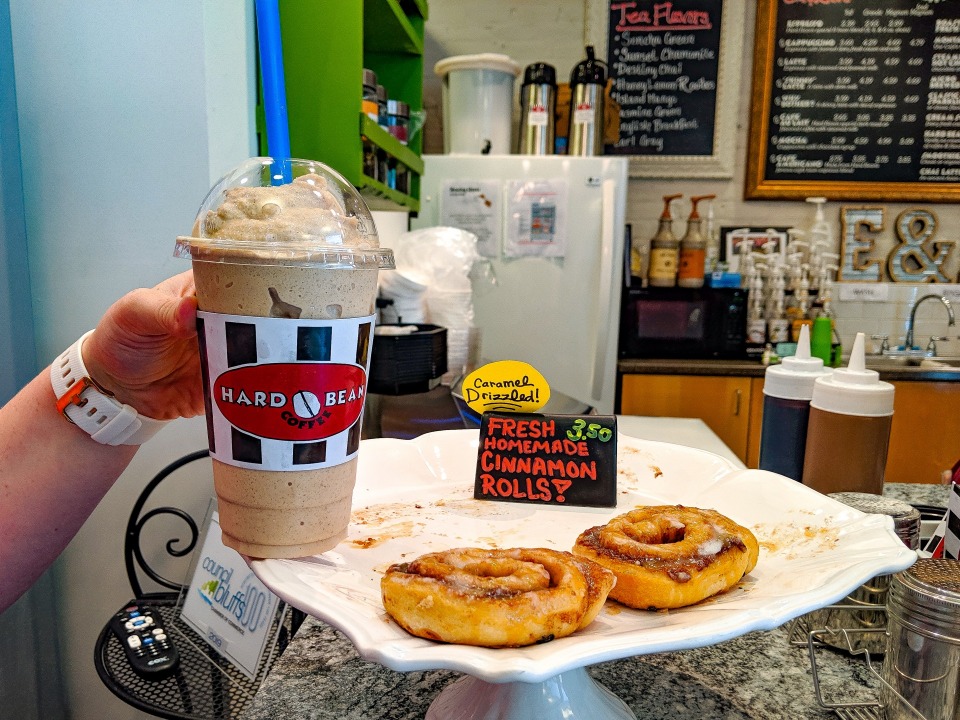 After Scooter’s moved out of the Council Bluffs Area Chamber of Commerce building, Em & Liv’s Hard Bean Coffee moved in this past July. In addition to coffee, the homey shop serves up hot chocolate, micro-brewed tea, smoothies, soups, sandwiches, and more.

It was a busy July in CB; Full Fledged Brewing Co. also opened its doors. Along with their own brew, the brewery has local brews on tap from Iowa and Nebraska and a couple from out of state. Come down on one of the nights they’re hosting an event for drinks, food trucks, music, and more. 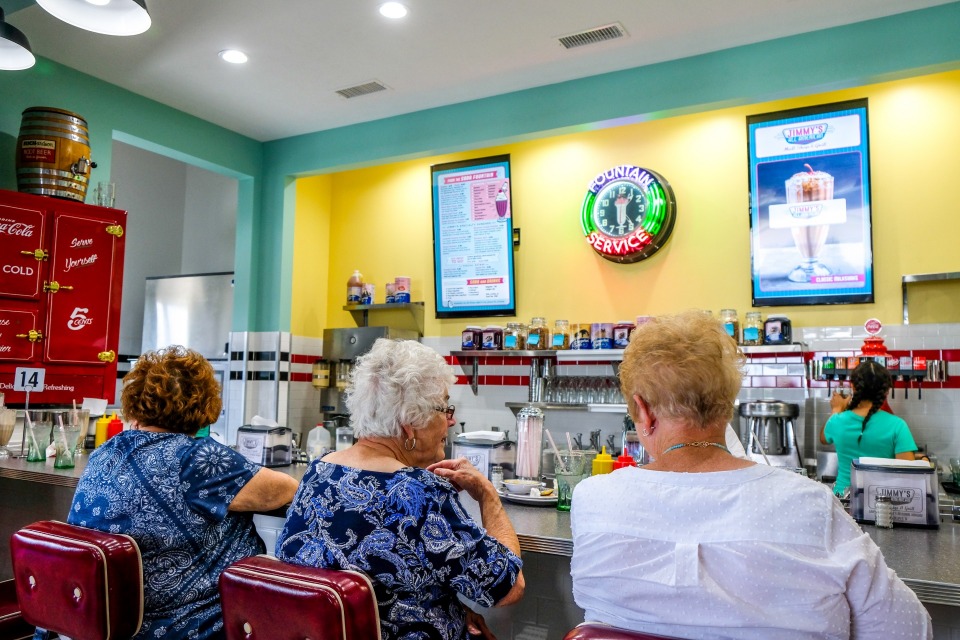 Jimmy’s opened in June of this year. The restaurant is exquisitely styled after classic ‘50s and ‘60s diners. They serve traditional diner comfort food along with the Midwest classic of cheese frenchees.

Another restaurant that opened in June, The Porch serves homestyle dishes (like mac and cheese) along with 10 beers on tap and an unlimited salad bar option. Their patio includes sand volleyball courts; enjoy a meal and a game!

The Hub and Pizza & More 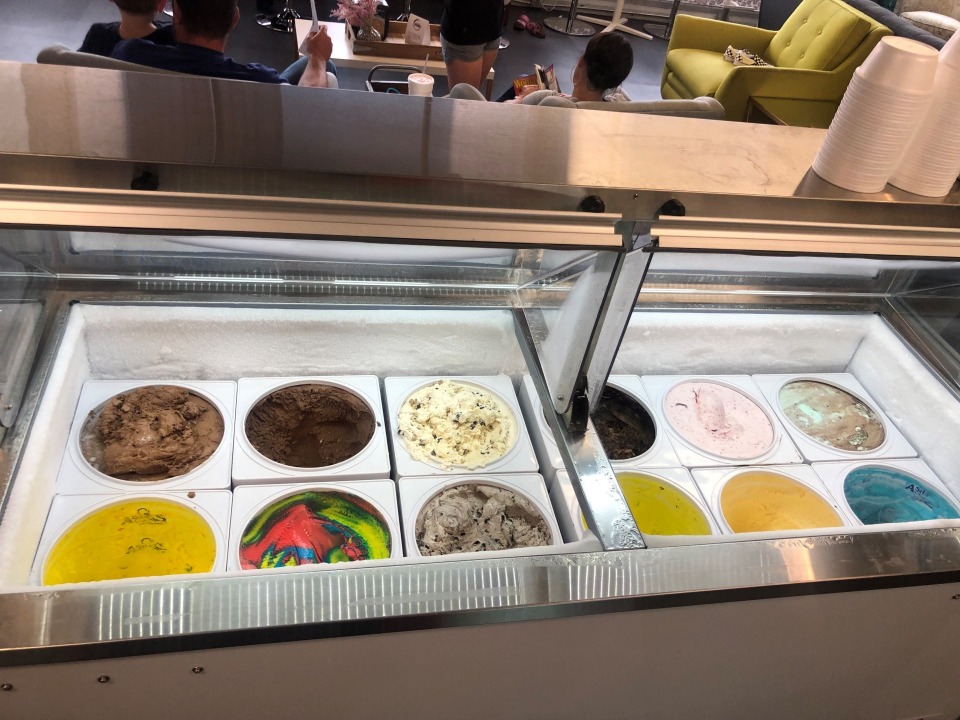 In June, The Hub: Family Entertainment Center & Trampoline Park’s coffee shop evolved into The Hub Pizza & More, serving pizza, snacks, and hard serve ice cream in addition to coffee. Their ice cream will be available all year long and comes in 12 different flavors! The Hub itself is also newer; it opened in May of 2018. The trampoline park is every child’s dream come true with dunk hoops, a jousting beam, dodgeball, and more. The Hub is also home to Elite Cheerleading and Jumping Monkeys Childcare.

In May, Kimball Park completed renovations that included a playground, two pickleball courts, a basketball half-court, a climbing structure, and the Gerald C. Dixon Memorial Pavilion. Read more about the memorial pavilion and the park renovations on The Daily Nonpareil’s website. 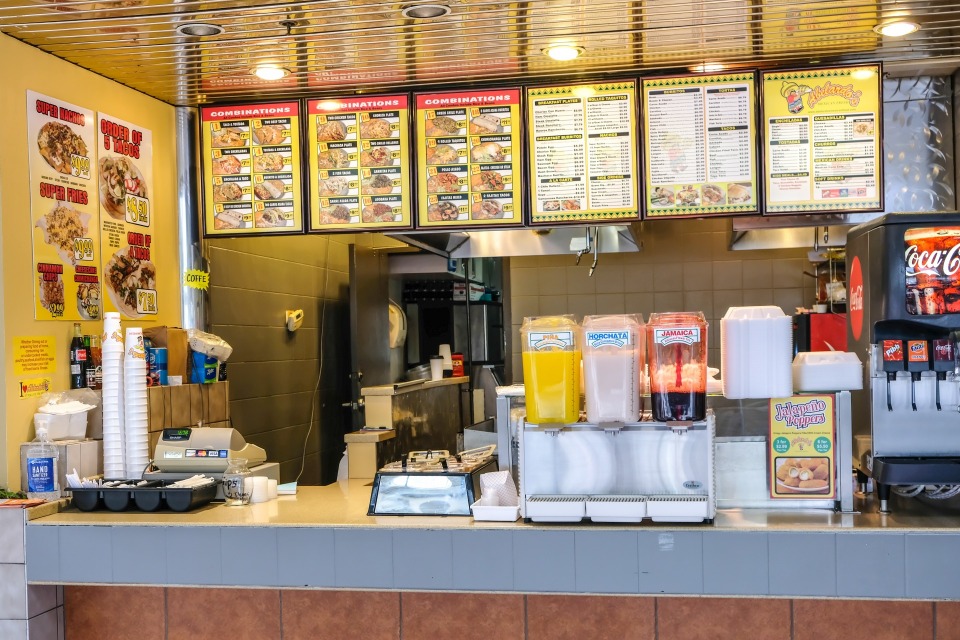 Abelardo’s opened at Mall of the Bluffs in April. They serve authentic Mexican food and drinks like Horchata and Tamarindo. Stop in for a quick, and flavorful bite to eat!

In late October of 2018, the re-imagined Dream Playground at Lake Manawa State Park re-opened to the public after $1.3 million in renovations. The playground is now the largest ADA accessible playground in Iowa according to KMTV. 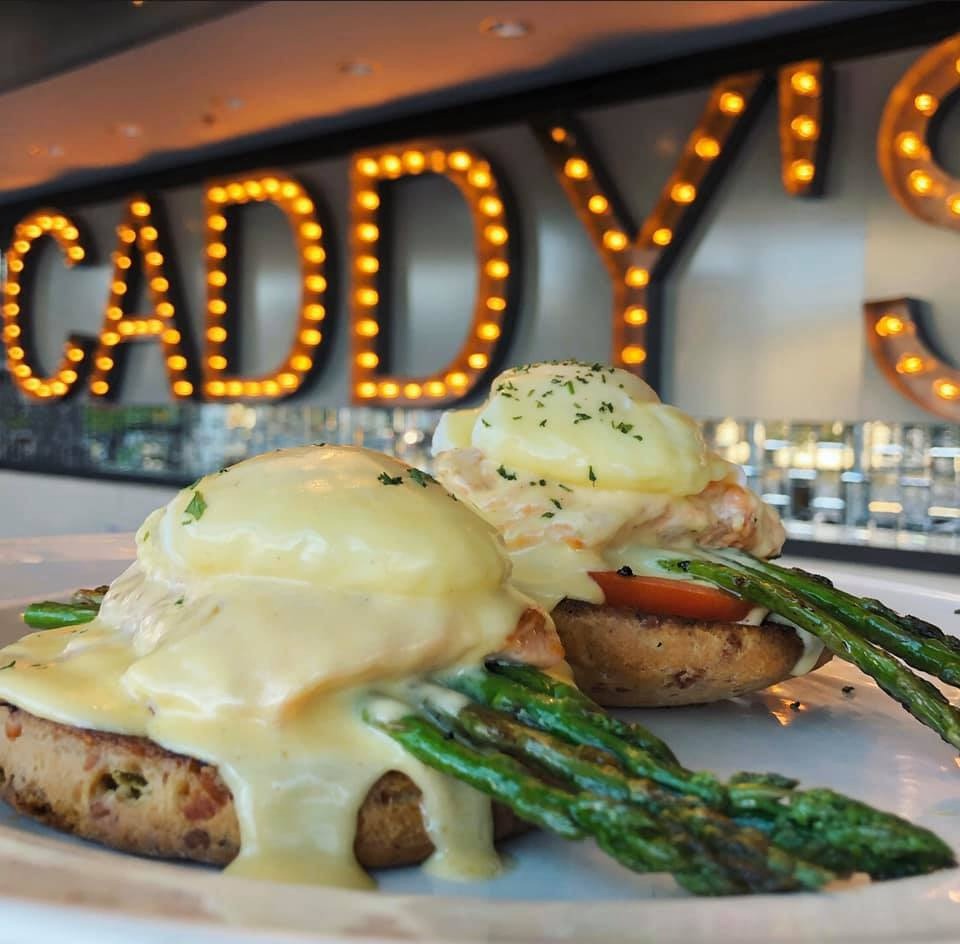 The summer of 2018 saw the opening of Caddy’s Kitchen & Cocktails, offering American cuisine, cocktails, and craft beers. The restaurant’s modern finishes and bright sign catch the eyes of passersby on the street, and its unique offerings—ever had your lunch served skewered over a Bloody Mary? —will have you going back for more.

In December 2017, the YMCA moved into a brand new $17.5 million facility. The 78,000 square foot building includes a wellness center, exercise classrooms, family swimming area, lap pool, gym, a therapy pool, a family center, and more. You’ll want to at least drive by to take in the impressive new facility.

Are we missing a restaurant or attraction that opened in the last two years? Please let us know! Send us an email at aenglish@UNleashCB.com.

This post was originally published on November 26, 2019 on the Unleash Council Bluffs blog.